Owls In Myth and Legend

Okay it's a little late but like they say, "Better late than never!" So here is my first "O" post for the Pagan Blog Project. I decided to do Owls and their connection to different pagan traditions (mainly Celtic and Cherokee but I also threw in some Greek). I have always had a special love and affinity for owls so this post is one that is close to my heart. 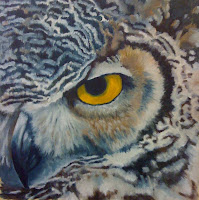 One of the most well known myths about owls is the sacred owl companion of the Greek goddess Athena. Originally she had a crow as her companion. she eventually grew tired of the crows prankster attitude and banished him. Seeking a replacement, Athena chose the owl for her wisdom and serious nature. As Athena's companion, the owl would reveal to her unseen truths.

In the Celtic tradition, the owl is know as cailleach-oidhche and she represents wisdom, stealth, initiation, change and detachment. She is clairvoyant and a seeker of deeper knowledge. She is also a sign that death is only a new beginning. She has great intuition and courage and she always follows her instincts. She is a bringer of hidden truth, omens, and secrets and she can help unmask those who wish to deceive you. Barn owls are especially sacred and known for being able to see the hidden and hear the unspoken. This is because barn owls have exceptional hearing and sight, even compared to other owls. 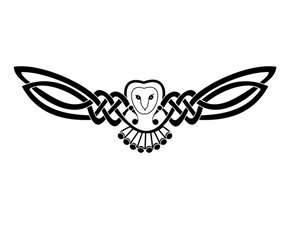 The owl is a sacred animal associated with the goddesses of the Underworld and she is a guide between that realm and ours. Raptors are often associated with the Moon and the Crone aspect of the Triple Goddess. This association can also bring connotations of death and darkness. Not only are owls sacred in Celtic traditions, but they are believed to have magickal powers due to their ability to see in the darkness.

In the Welsh tradition, owls symbolize death and renewal, wisdom, moon magick, and initiations. The Goddess Arianrhod's second form is that of an owl and uses the sight the owl to see into the darkness of the human soul. Her wings bring comfort and healing to those who seek it. 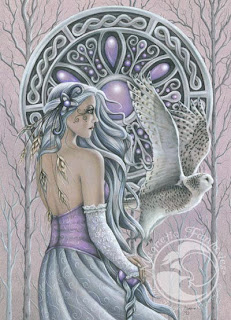 A famous Celtic legend about owls tells of  Blodeuwedd. The hero Lleu Llaw Gyffes has been told by his mother Arianrhod that he may never marry an ordinary human wife. To counteract her declaration, the magicians Math and Gwydion (his uncle) gather flowers of broom, meadowsweet, and oak and create from them a beautiful woman and named her Blodeuwedd (meaning 'flower face'). Blodeuwedd has an affair and her and her lover conspire to murder Lleu. However, Lleu cannot be killed at day or night, indoors or outdoors, riding or walking, clothed or naked, nor by any weapon lawfully made. Blodeuwedd tricks Lleu into revealing that he can be killed at dusk, wrapped in a net with one foot on a cauldron and one on a goat and with a spear forged for a year during the hours of mass. Using this information, Blodewedd arranges Lleu's death. When Lleu is struck by the spear, he transforms into an eagle and flies away. The magician Gwydion finds Lleu and manages to return him to his human form. As part of Lleu's revenge, he transforms Blodeuwedd into an owl because the owl is despised by other birds and that is why the owl hunts at night while other birds rest. 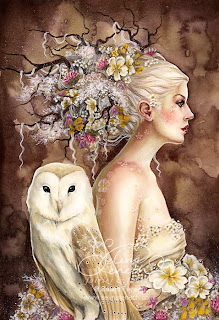 Within the Cherokee nation, the owl reached the ultimate level of sacredness and purity. The owl, along with the cougar, were the only creatures that did not fall asleep during the seven days of Creation, and that is the reason why they are nocturnal. They are also sacred because of their human characteristics. The owl has large round eyes situated at the front of its face, just like a human. She can also close each one individually. Cherokee shamans believed that Eastern Screech Owls were consultants on punishment and sickness. To this day owls represent vision and insight. 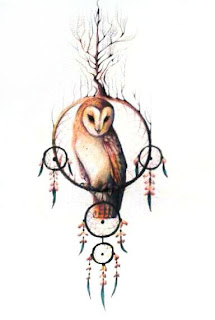 Many cultures focus on the dark aspects of owl symbolism due to human's fear of the dark and the creatures that dwell there. The hoot of an owl is a portent of death and bad luck. Modern medicine has confirmed that the majority of people die at night, therefore the owl, the raptor of the night, is seen as a messenger of death.

The owl is a mysterious and mystical animal that appears in many cultures and myths. She is a symbol of wisdom and knowledge as well as a creature of the night. This combination reveals the owl to be a creature capable of clairvoyance and premonition.
at 9:17 PM
Share